Free Speech on Campus: A Challenge of Our Time 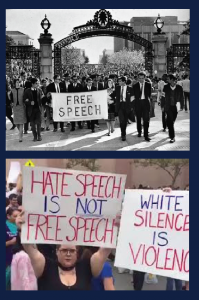 In recent years, American colleges and universities have experienced a series of often quite serious challenges to the fundamental principles of academic freedom and free expression, as speakers have been disinvited, events have been disrupted, in some instances even by physical attacks. In this talk, Professor Stone will trace the history of academic freedom in our nation, explore some of the reasons for the recent controversies, present an approach to these issues, and suggest avenues to explore going forward.
Geoffrey Stone is Edward H. Levi Distinguished Service Professor of Law and former Provost of the University of Chicago, and former Dean of its School of Law. He headed Chicago’s task force on Campus Free Speech, which authored the widely influential Chicago Statement on Freedom of Expression (2015).
This event, sponsored by the Atlantic World Research Network as its contribution to “The ’60s: Exploring the Limits,” is free and open to the campus community and the general public, and parking will be provided via free exit from the Oakland Avenue Parking Deck.