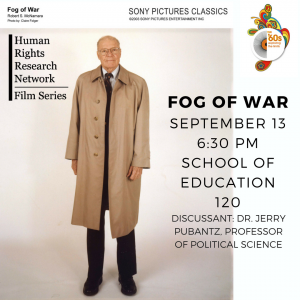 The Human Rights Research Network and the College of Arts and Sciences
will present its first film Fog of War on Thursday, September 13, at 6:30 p.m.
at SOEB 120.

Fog of War is an Academy Award-winning documentary features Robert McNamara detailing eleven lessons he learned about warfare and diplomacy from his experiences during the Vietnam War.